Esophageal atresia is a birth defect in which the esophagus, which normally connects the mouth with the stomach, is interrupted. The medical definition of ‘atresia’ is the following: absence or closure of a natural passage of the body.

The normal anatomy of the esophagus and respiratory tract shows a direct connection of the esophagus to the stomach and the windpipe to the lungs. There is no connection between the two. The figure below shows the different types of Esophageal atresia. 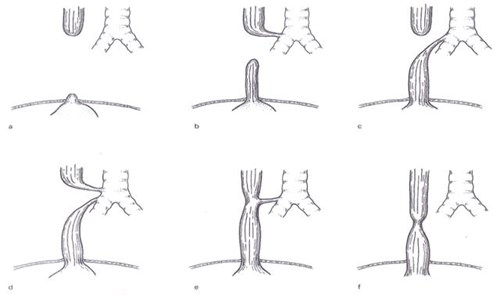 Type A: Esophageal atresia without tracheoesophageal fistula (8%):
With this type, a large part of the esophagus, so-called long-gap, is missing and there is no connection to the trachea. This distance has to be bridged: depending on the distance to be bridged, the surgical technique is determined.

Type B: Esophageal atresia with a proximal tracheoesophageal fistula (1%):
In this case, not only is part of the esophagus missing, but there is also a connection (fistula) between the upper (proximal) part and the trachea. Saliva or food goes via the fistula to the lungs, instead of to the stomach. The lower part of the esophagus ends blindly. The atresia is often long-gap.

Type D: Esophageal atresia with both a proximal and a distal tracheoesophageal fistula (1%):
Here we find a combination of both types B and C. This type has a double fistula connection: the upper and lower Esophageal stumps both end into the trachea. Through these two connections, both saliva and stomach contents can go to the lungs.

Type E: Tracheoesophageal fistula without atresia (H-fistula) (4%):
With this type, the esophagus has normally developed but there is a connection between the esophagus and the windpipe. This type is usually only noticed a few days or even weeks after birth because there is a passage to the stomach. This allows a child to drink normally. However, food and saliva may enter the lungs, causing the child to choke or having trouble breathing.

Type F: Esophageal stenosis (1%):
There is no connection between the esophagus and the trachea, but the esophagus is constricted. The narrowing can be so severe that nutrition and/or saliva cannot pass through to the stomach.